Some folks ask, “Why has it taken four years to get the following information out.  Others say, “Why hasn't the main stream media investigated and published it?  Still others are wondering to themselves, “Why are we just now seeing this?

Are you kiddin’ me!  Honestly, you don’t know the answers yet?  Get off the friggin’ couch and find some news, look up stuff on the net, read some blogs, ask friends or neighbors or go to and demand the truth, but do something!  If, after all that has happened since this lil’ warped punk has taken office, you still do not have a clue why the media doesn’t put out the truth, then my friend, you are a lost cause!

Now, take a read about Barry and his Choom Gang: 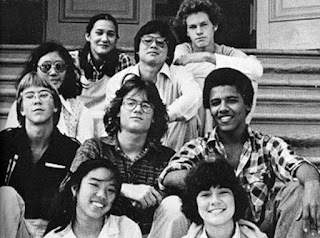 A self-selected group of boys at , an upper class prep school in , whose members loved good times and called themselves the Choom Gang.  Choom is a verb, meaning "to smoke marijuana." 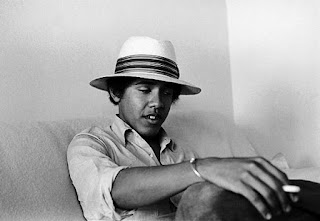 As a member of the Choom Gang, Barry Obama was known for starting a few pot-smoking trends. The first was called "TA," short for "total absorption."  In other words they’d get completely “zombied” out on the stuff.  No one or two puffs here, oh, and they did inhale!  A bunch!
3. Roof Hits 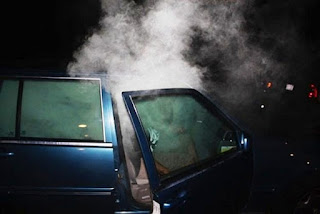 Along with TA, Barry popularized the concept of "roof hits", which meant that Barry’s Gang would get in the car and all the windows had to be rolled up so no smoke blew out and went to waste; when the pot was gone, they tilted their heads back and sucked in the last bit of smoke from the ceiling. 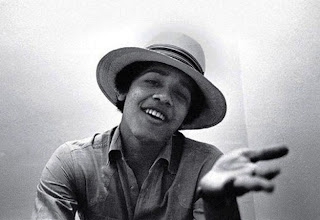 When you were with Barry and his pals, if you exhaled precious pakalolo (Hawaiian slang for marijuana, meaning "numbing tobacco") instead of absorbing it fully into your lungs, you were assessed a penalty and your turn was skipped the next time the joint came around. "Wasting good bud smoke was not tolerated," explained one member of the Choom Gang, Tom Topolinski, the Chinese-looking kid with a Polish name who answered to Topo. 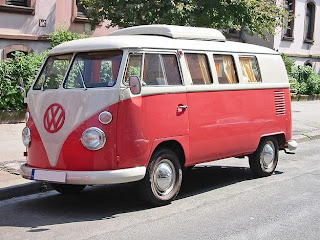 [Choom Gang member] Mark Bendix's Volkswagen bus, also known as the Choomwagon.  The other members considered Mark Bendix the glue which held the Gang together.  He was funny, creative, and uninhibited, with a thing for Marvel Comics. He also had that VW bus and a house with a pool, a bong (marijuana device), and a Nerf basketball, all enticements for them to slip off midday for a few unauthorized hours of recreation and weed. 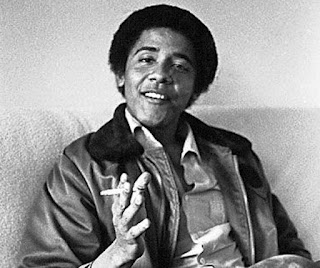 Barry also had a knack for interceptions. When a joint was making the rounds, he often elbowed his way in, out of turn, shouted "Intercepted" and took an extra hit. No one seemed to mind. 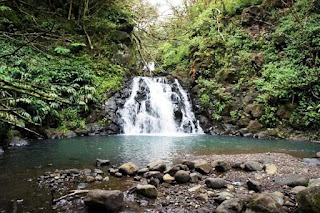 Choom Gang members often made their way to Aku Ponds at the end of Manoa Stream, where they slipped past the liliko'i vines and the KAPU (keep out) signs, waded into waist-high cool mountain water, stood near the rock where water rushed overhead, and held up a slipper (what flip-flops are called in Hawaii) to create an air pocket canopy. It was a natural high, they said, stoned or not. 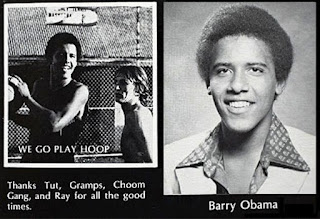 Ray was a long-haired haole hippie who worked at the Mama Mia Pizza Parlor not far from Punahou and lived in a dilapidated bus in an abandoned warehouse. … According to Topolinski, Ray the dealer was "freakin' scary." Many years later they learned that he had been killed with a ball-peen hammer by a scorned gay lover. But at the time he was useful because of his ability to "score quality weed."  He was Barry’s supplier.

In another section of the [senior] yearbook, students were given a block of space to express thanks and define their high school experience. … Nestled below [Obama's] photographs was one odd line of gratitude: "Thanks Tut, Gramps, Choom Gang, and Ray for all the good times." 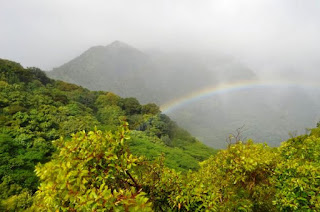 Their favorite hangout was a place they called Pumping Stations, a lush hideaway off an unmarked, roughly paved road partway up . They parked single file on the grassy edge, turned up their stereos playing Aerosmith, Blue Oyster Cult, and Stevie Wonder, lit up some "sweet-sticky Hawaiian buds" and washed it down with "green bottle beer" (the Choom Gang preferred Heineken, Becks, and St. Pauli Girl). 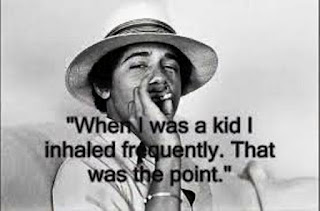 One of the favorite words in their subculture revealed their democratic nature. The word was veto. Whenever an idea was broached, someone could hold up his hand in the V sign (a backward peace sign of that era) and indicate that the motion wash not approved. They later shortened the process so that you could just shout "V" to get the point across. In the Choom Gang, all V's were created equal. 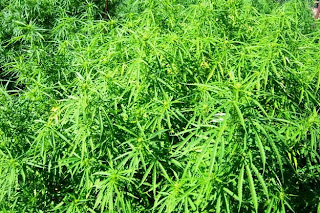 In the of Barry's teenage years marijuana was flourishing up in the hills, out in the countryside, in covert greenhouses everywhere. It was sold and smoked right there in front of your eyes and nose; Maui Wowie, Kauai Electric, Puna Bud, Kona Gold, and other local variations of pakololo were readily available. 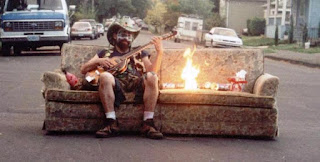 The Barf Couch earned its name early in the first trimester when a freshman across the hall from Obama [in the Haines Hall Annex dorm at ] drank himself into a stupor and threw up all over himself and the couch. In the manner of pallbearers hoisting a coffin, a line of Annexers lifted the tainted sofa with the freshman aboard and toted it out the back door and down four steps to the first concrete landing on the way to the parking lot. A day later, the couch remained outside in the sun, resting on its side with cushions off (someone had hosed it clean), and soon it was back in the hallway nook. 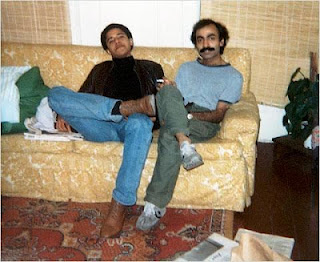 The main hallway at Haines Hall was called the Annex, home to the impromptu Annex Olympics: long-jumping onto a pile of mattresses, wrestling in underwear, hacking golf balls down the hallway toward the open back door, boxing while drunk. There were the non-Olympic sports of lighting farts and judging them by color, tipping over the Coke machine, breaking the glass fire extinguisher case, putting out cigarettes on the carpet, falling asleep on the carpet, flinging Frisbees at the ceiling-mounted alarm bell, tasting pizza boxes to the floor, and smoking pot from a three-foot crimson opaque bong, a two-man event involving the smoker and an accomplice standing ready to respond to the order "Hey, dude, light the bowl!"

Yessir.  We've come a long way in the few short years since Bill Clinton's famous but then necessary lie (no, Monica, we're talking about the other one) - you know, that he just didn't inhale.
More to follow, I'm sure.  People are beginning to talk about their history with Barry.

DON'T FORGE***************** - Obama, you insignificant lil' flea, you cannot defeat me! I am backed by a fella, who had spikes driven in both hands and feet, then he was hung on timbers and the only thing holding him up were those spikes, then he was stabbed and given up for dead, then he was entombed, then he walked out of that tomb and ascended up into the sky and after all of that he still lives today! Yes, this is my backing! What's yours? George Soros? I am laughing whole-heartedly right now! How small you really are Obama! Oh yeah, if you think this fella backing me is something, I just can't wait 'til you meet his father! Good luck, Hehehehehe!

DON'T BE TIMID! Tell me what ya think.

TOTAL FOLKS WHO CHECKED IN

POSTS FOLKS ARE TALKIN' ABOUT!